The Second Meeting of the Multiethnic Feminist Network under Roma women`s leadership in Vojvodina. 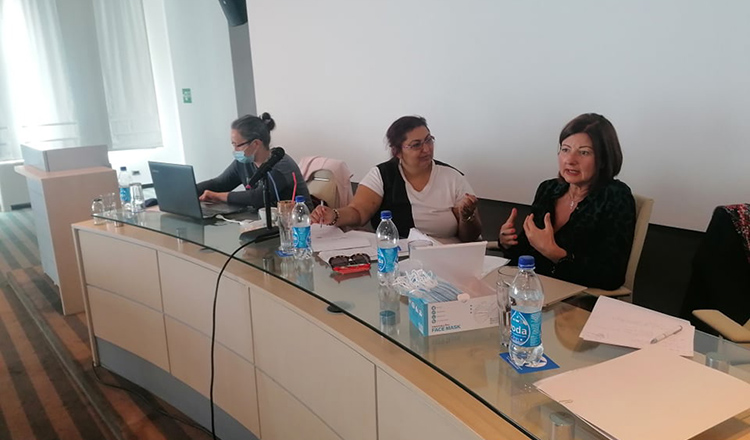 Association of Roma Novi Becej had organized the second meeting of the first Multiethnic feminist Network under Roma women`s Leadership in Vojvodina in the Hotel “Vojvodina” in Zrenjanin on 28.09.2020. Representatives of the TRAG Foundation, Jelena Popović, Marta Zagorac and Masha Elezović, also attended the meeting and participated in the work, as well as Aleksadra Šanjević on behalf of the Fund for an Open Society.

Respecting measures to prevent the spread of Covid 19 and personal views on participation, the meeting brought together only 14 representatives of organizations and informal groups. The Multiethnic Feminist Network led by Roma women currently has 15 organizations and 5 women`s groups, which is not a final number because the Network is still open to all minority women from Vojvodina, but also to organizations, groups and women of multi-marginalized women.

The meeting first presented the research "The impact of the Covid 19 pandemic on the socio-economic position of women from marginalized groups in the territory of APV", which was the first joint activity of activists of the Multiethnic Feminist Network under Roma women`s leadership. This research, as well as work on strengthening communication within the network and during the Covid 19 pandemic, was supported by the Open Society Fund Serbia. This research will soon be available in electronic form on the website of the Roma Association Novi Becej.

During the meeting it was also discussed on the problems that representatives of minority communities face on a daily basis in their local communities proposals for further work of the network were presented, given new ideas for improving the position of minority communities currently joining the initiative and agreed steps to define an initial strategy of the Network.

The Multiethnic Feminist Network under Roma women`s leadership in Vojvodina is a networking concept that the Roma Association Novi Becej started through its work on the Women's Roma Network of Banat (now Vojvodina because we have organizations outside Banat) at the end of 2007. Vojvodina is a multiethnic environment, in which it is difficult, almost impossible, to define activism as purely Roma, Slovak or Hungarian because civic and social interaction is multinational. This network connects women from multiple marginalized groups and national minorities, firstly to become independent, support each other and fight together for their rights in everyday life.