Signed Declaration against early marriages in the Roma communities in Vojvodina 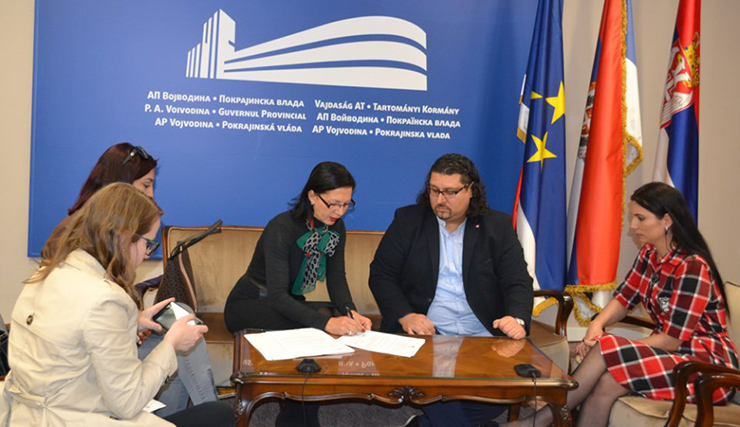 On May 29th, 2019. In the Executive Council of Vojvodina, the Declaration on dedication to end the practice of early, contracted and child marriages in Roma communities in Vojvodina was signed. On behalf of the Roma Inclusion Office of Vojvodina, the Declaration was signed by the director Milos Nikolic, and by the Association of Roma New Becej Ms. Zorica Surlan. At today's signing, Nikolic said that it is very important to talk about this issue on a regular basis. "I think that together we need to launch research that should focus on detecting the positive and negative practices of relevant institutions, centers for social work, courts and other institutions, as well as joint projects that will strengthen Roma women and, therefore, the whole Roma community. The topic of early, juvenile and child marriages has not been considered for a long time in the context of human rights, women's and children rights exceptionally. Ignoring the consequences of this negative phenomenon on the society as a whole, and above all on the lives of Roma women, has led to the strengthening of the patriarchal attitudes in the community, which limits the role of women to the role of mother, housewife and wife.”

On the contrary, Nikolic said that the Roma Inclusion Office, in cooperation with the Association of Roma from Novi Bečej, will implement the project "EARLY MARRIAGES: A VIOLATION OF THE RIGHTS OF ROMA CHILDREN AND WOMEN", with the intent to place this important issue at the top of the agenda in the processes of improving the position of the Roma community in the society. The project should be implemented in at least five Roma Vojvodina settlements (Novi Sad, Kikinda, Bečej, Subotica, Pančevo).